Mind, their first phase singles all came backed with intriguing B sides too; Go-Betweens songs with their flaws left in, and in certain lights some of these rough cut gems have more life in them than the highly polished diamonds on the albums.  Take, for example, Grant’s enigmatic ‘Heaven says’ and Robert’s metallic, shellac ‘World weary’, both as angular as anything on Send me a lullaby, and more evidence that the Go-Betweens have been as underrated as a post-punk art band as they are highly rated for what they became: second-to-none purveyors of literate, lyrical romantic-realist pop.  In his essay on the Velvet Underground in The 10 rules of rock and roll, Robert writes:

‘My first great realisation about the Velvet Underground was this: they were the first band I’d ever heard who wrote songs better than they could play them. … And this is exactly what the Go-Betweens tried to do at the start: we wanted to be a band that wrote great songs – but could barely play them.  This was partly due to our primitive musical ability, but also because to us it seemed noble and perverse – an attempt to upset the normal balance of rock’n’roll between what songs you had and how good you were on your instruments.  The kings and queens of this were the Velvet Underground.’

But that’s just the first third of the first phase of the Go-Betweens.  Their musical prowess soon matched their songwriting ambition, and even their offcuts are flush with melody and poetry.  There’s the emotional power struggle of Robert’s ‘Rare breed’, and his ‘Rock and roll friend’, which inverts the anthemic language of the form and loads it with luxurious heaps of self-pity.  Then there’s Grant’s almost-masterpiece, ‘Casanova’s last words’; but for the fact that it’s a little spoilt by the over-insistent gated reverb drum sound, it would have been my choice here.  But it’s still a wonderful song, full of detail and lived wisdom, the wisdom of McLennan and of Casanova; of life lived to the full. 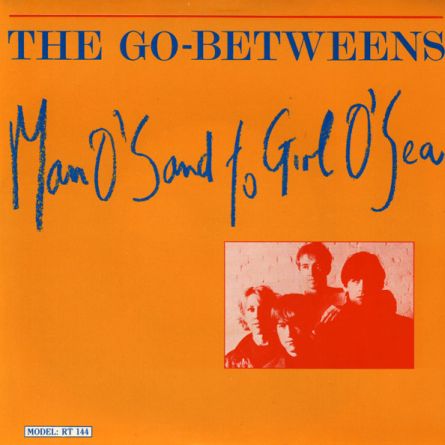 All these offcuts you can find in their best available versions on the two disc editions of the albums.  ‘This girl, black girl’ appears on Before Hollywood though really it belongs to Spring Hill fair, and is notable not only as one half of the first pair of recordings to feature Robert Vickers on bass – it’s great to hear him feeling his way into being a Go-Between – but also as the first flowering of the image-laden and melody-soaked song writing whose impressive shoots had been Grant’s ‘Cattle and cane’ and ‘Dusty in here’.  As an elegy, ‘This girl’ matches Robert’s setting of Marion Stout’s lyric for ‘When people are dead’, and who better to tell us about how it came to be than the songwriter himself, as he did in the sleeve notes for the first ever Go-Betweens compilation, 1978-1990:

‘There is an annual event in north Queensland country life called the Oak Park Races.  People come together to race their horses and to congratulate each other on a good year or to console each other if it has been a poor one.  I had just returned from a trip which included a recording session in Scotland, a close shave in Egypt and a six week hangover in New York.  I found myself in a tent three hundred miles from the nearest bookshop.  My relatives asked me to play guitar for them but I knew it was impossible to dance the gypsy tap to ‘I need two heads’ so I wrote this song.’

This entry was posted on Monday, March 15th, 2010 at 2:10 pm and is filed under Music. You can follow any responses to this entry through the RSS 2.0 feed. You can leave a response, or trackback from your own site.