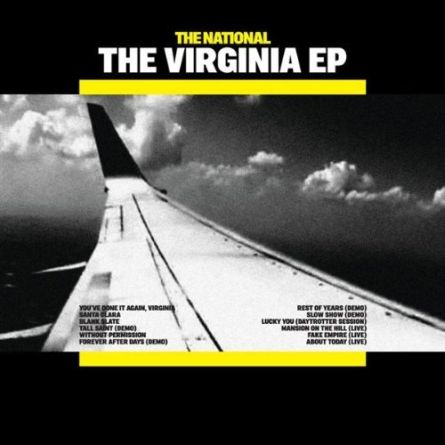 They’re the kind of group whose fans are fervent enough to call ‘heresy!’ over this, but with Boxer, the National have come as close to making a great album, start to finish, as I suspect they ever will.  Boxer’s charm goes beyond the obvious, attention-grabbing immediacy and idiosyncrasy of ‘Fake empire’ or ‘Mistaken for strangers’; there is for example ‘Start a war’ with unwittingly or otherwise its acoustic guitar echoing ‘Don’t send me away’ by the Verlaines and its title the song on Pacific Street by the Pale Fountains (a record also bedecked in yellow and black); or ‘Racing like a pro’ in which the glow of youthful dreams are turned into grim adult reality using an everyday melody that no-one had yet thought to pluck off the shelf in the vast repository of tunes that the Muses watch over like the curatorial librarians of a past, present and future Alexandria.

What separates the National – two sets of brothers and an unrelated vocalist – from those at the level to which I suspect they aspire – REM, U2, Bruce Springsteen – is that Matt Berninger is a world-weary front man rather than a world-dominating one, a self-confessed fuck-up (to judge at least from the National’s earlier releases) whose self-deprecating humour leavens the mood in ways that rarely happens with our good friends the spiky extraterrestrial, the bombastic evangelist and the everyman storyteller and sentimentalist.  Their songs provoke imaginative responses and touch in unexpected ways on the lives of their listeners (‘Mr. November’, ‘Gospel’).  The world-weariness jars gently and beautifully with the messianic energy of the National’s extra large music, propelled by the big, propulsive drumming of Bryan Devendorf.  When the National’s mood slows or saddens, then they have more in common with Tindersticks, Tom Waits or even the Blue Nile than with Michael, Bono or Bruce; city sickness, night owl melancholy and romantic yearning are there in abundance.  I’m also reminded of Mark Eitzel’s desperate humour when coupled with the sustained tension and wild release of the American Music Club’s California, though the contrast the National generate is less extreme, less a thing of beauty.  But there’s still the same America-sized scale, the same underlying anglophile audiophile tendencies.  Messrs Curtis, Sumner, Hook, Morris, and Hannett, take a bow.

So it will be fascinating to see which way the National go next – aiming for the worldwide glory and fame that supporting both REM and Barack Obama suggests, or steering clear of those treacherous waters, deftly navigating round the whirlpools and offshore rocks to explore quieter seas of greater marine interest.  Most likely will be a middle path, one that might be interpreted either as a healthy disregard for the spoils of pop war, or an unhealthy shirking of the historical imperative for groups of their type to be bigger than is strictly necessary.  Either way, I reckon they’ll scale some more heights, even if they probably can’t top Boxer.

To fill the merchandising gap between Boxer and the record due in 2010, we have had the A skin, a night / The Virginia EP film and offcuts combo.  The film makes a nice enough background for dabbling either with hallucinogens or on your laptop, though I suspect it would irritate if you actually paid too much attention to it.  But fair play to the National for letting director Vincent Moon go his own way.  The offcuts are of the kind of quality that makes them collectively another fine but not great LP, and I had a hard time choosing from the four B sides included in the set, each of which presents a different facet of the National.  Should we eliminate ‘Without permission’ because it’s a cover?  That would be harsh, particularly as Caroline Martin’s beautiful song in its original form is so Nationalesque; how it comes to be that way is almost certainly one of those quirks of fate that determines a style of song writing can emerge independently in two geographical locations at more or less the same time.  But you can see why the National were drawn to it.  The song burns like a slow fuse and crucially both writer and performer resist the temptation to let it lead to a stack of dynamite.

‘Blank slate’ and the maudlin but graceful tarrying of ‘Santa Clara’ are presumably outtakes from the Boxer sessions, but might have been at home on the record.  Time can make the artist and the offcut-seeking admirer wonder why they left off these but put on, say, ‘Green gloves’.  ‘Blank slate’ has the kind of sonic propulsion perfected within the grooves of records released on Flying Nun and later adopted by residents of Sub Pop.  But really it all goes back to Joy Division.  The lyric is an imaginative wonder in keeping with the song’s title that Ian Curtis could never have sung:

In the end I’ve gone for ‘You’ve done it again, Virginia’, another short story about an individual struggling with life and drink, another Berninger pen portrait, another secret meeting in the basement of his brain.  Lyrics like ‘a cool, tall drink of water is all you ever wanted to be’ are scored with an undercurrent of the kind of old-timer, sepia-toned brass that Tom Waits used to colour ‘In the neighbourhood’.  It’s an irresistible combination.

This entry was posted on Monday, November 30th, 2009 at 7:11 pm and is filed under Film, Music. You can follow any responses to this entry through the RSS 2.0 feed. You can leave a response, or trackback from your own site.