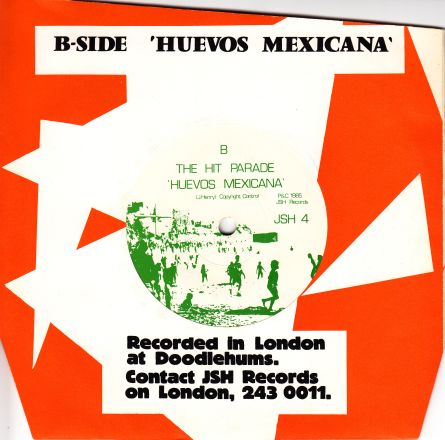 Huebos Mexicana is a breakfast dish served in the cafes of Palenque, Chiapas. Rumours maintain that the barrios and cantinas still ring to the beat of this infectious tune.

You may not remember, but in the mid-eighties the Hit Parade – school friends Julian Henry, Matt Moffatt and Raymond Watts – managed a run of six Top Ten singles.  For a while it seemed that only Bananarama could match them for consistency – but then Bananarama failed to hit the Number One spot, which is just what the Hit Parade achieved in 1986 with ‘See you in Havana’, that fabulous ballad on which Julian Henry ceded vocal duties to Cath Carroll, herself already well on the way to being a household name as frontwoman of her group Miaow.  Possessed of that wonderful voice which we all used to argue about – was it the blend and nip of Irish coffee and cream, or rather the sweetness of honey with the zest of lemon? – she helped push the Hit Parade to that next level of stardom.  It seemed there was no stopping them now.  But then Hi-NRG follow-up ‘I get so sentimental’ was trumped on the dance floor and kept off the top by Rick Astley’s ‘Never gonna give you up’; and despite a heart-breaking melody and the continued kick of Carroll’s presence, ‘The sun in my eyes’ barely scraped the edges of the top forty.

The game seemed to be over.  It was left to the considerably more image-conscious Pet Shop Boys to clean up with their similarly melodic sequenced pop.  Still, the singles collection With love from the Hit Parade did good business in the album charts on its release in 1990; nostalgia had already had a chance to settle on the Hit Parade like morning dew on particularly green and well-tended grass.

You may not remember, because I’m making it up.  In a perfect world, it might have happened.  In any of many alternate realities, it probably did.  In those perfect or alternate worlds, the recordings of this world’s Hit Parade might well have been beefed up and generally enriched to the point that – as they sprang from tinny daytime factory transistors – no population of human beings could have said no to them.  In this world, had some of Julian Henry’s songs found their way into Stock, Aitken & Waterman’s clutches, it’s conceivable that they would now be staples of eighties discos and Magic 105.4 FM’s playlists, though not necessarily with the Hit Parade as the artist’s name.  But the imperfectly crafted pop songs of such a perfectly named pop group merited them finding themselves in that mythic place, whether or not the intention of the name was ironic.  (There must have been dozens of new groups since who’ve thought, damn, wish I’d got to that name first.)

And in an imaginary past where the Hit Parade were regulars in the Hit Parade, we might recall that ‘You didn’t love me then’ was the A side – fine as it was – overturned by its flip immediately attracting all the radio play; hastily resleeved as the lead track, we might plausibly pretend that ‘Huevos Mexicana’ went top five, and in so doing disqualified me from writing about it.

But in this world on this blog I can say that I love ‘Huevos Mexicana’.  The spindle hole on my copy of the vinyl was punched slightly off centre, so to my ears it has always had an unintentional elliptical sound effect that somehow added an extra woozy glow to its already euphoric charms.  Lyrically it captures all sorts of things within the finely woven web of its pop – the Beats, summer holidays, spicy scrambled eggs for breakfast in Tijuana, fishing marlin, the Zona Rosa in Mexico City; even Malcolm Lowry’s metaphysically challenging novel Under the volcano is cutely referenced.  What a contrast with almost all of the rest of Julian Henry’s songs of the time, which majored on love breaking down against a west London backdrop.

In the real world, the Hit Parade did not seem unduly dented by their failure to set the charts alight, going on to record two singles and an LP for Sarah Records in the early nineties before coming back to life in the 21st century.  And here’s where perfect or alternate and real worlds collide, for now of course it’s possible to imagine all this for yourself by downloading that collection of hit singles, With love from the Hit Parade.

This entry was posted on Monday, November 9th, 2009 at 4:06 pm and is filed under Music. You can follow any responses to this entry through the RSS 2.0 feed. You can leave a response, or trackback from your own site.